October 5, 2022
By Harfang Exploration
October 5, 2022 – Montreal, Québec. Harfang Exploration Inc. (“Harfang” or the “Company”) (TSX-V: HAR) is pleased to announce results from its recently completed exploration program on the Serpent-Radisson Property (“Serpent-Radisson” or the “Property”). This program resulted in the discovery of several gold-in-soil anomalous zones as well as additional bedrock occurrences of high-grade gold mineralization. In addition, the Company discovered lithium and rare element pegmatite dykes in the eastern part of the Property.

The summer exploration program represents the first fieldwork on the combined Property following the successful merger of Harfang and LaSalle Exploration Corp. in April 2022 and emphasis was placed on areas that had received little exploration to date. Harfang retains a strong treasury with $9.49 M in cash (July 31, 2022).

The Property covers 50,843 hectares (988 claims) of prospective Archean basement terrain hosting a district-scale gold endowment discovered by the Company. The target area is comprised of a kilometric scale gold-in-till anomaly (>8 km2) and more than 55 high-grade gold surface showings identified to-date, clustered in a corridor straddling the boundary between the previous Serpent and Radisson properties.

In June, Harfang executed a soil geochemical survey that was a continuation of previous surveys completed further east on the Property. The 2022 survey was part of an extensive prospecting program mainly focused along the gold-bearing trends straddling the boundary between the former Serpent and Radisson properties. In addition, Harfang initiated work to evaluate pegmatite stocks and dykes on the eastern part of the Property which have been found to be prospective for lithium and rare elements including tantalum and cesium.

The 2022 soil survey was designed to provide further definition of the western extension of the gold-in-soil and gold-in-till anomalies discovered through surveys completed since 2019 (Figure 1). A total of 1,133 B-horizon soil samples were collected during the 2022 summer along lines spaced 200 metre apart, with samples collected every 50 metres along each line. Approximately 10% of the soil samples contain more than 25 ppb Au (0.025 g/t) which is considered an anomalous value in this type of geological setting. Five (5) soil samples contain between 1.17 g/t and 2.27 g/t Au.

Results disclosed in this news release represent the largest and strongest gold-in-soil anomaly outlined on the Property to date. Figure 1 shows the outline of this cluster dominated by 65 samples with gold above 25 ppb covering a 2.2 km by 1 km area. This outline overlaps the previously reported southwestern extension of the gold-in-till anomaly (see news release dated January 25, 2022). Sub-trends of gold-rich samples within the larger anomalous cluster appear to show a northeast orientation coincident with one of the dominant structural trends observed on the field. The distribution of gold in glacial sediments (soil and till) in this part of the Property is interpreted to be the result of either gold-bearing structures in the underlying bedrock or a glacial dispersal train towards the southwest and derived from a potential mineralized bedrock up-ice.

Furthermore, soil samples collected in the southeastern part of the Radisson Property returned small clusters of high gold values. Most of these clusters are spatially associated with confirmed or interpreted northeast and west-northwest gold-bearing structural breaks (e.g. Goldhawk).

Most of the prospecting program was focused on the former Radisson Property in proximity to the former Serpent Property (Figure 2). A total of 534 rock samples were collected during the summer. Four (4) gold showings, up to 26.3 g/t, 14.1 g/t and 10.5 g/t Au, were discovered. Some of them show a strong correlation with high values in silver (up to 262 g/t Ag) and lead (up to 3.93% Pb) (Table 1).

As for previous exploration programs on the Property, extensive sulphide-bearing shear zones and quartz veins were commonly discovered along northeast and west-northwest structural lineaments. Some of these features are interpreted to be the extensions of gold-bearing structures previously discovered by the Company, namely Goldhawk, Goldhawk Extension and Talon. Overall, 12% of the samples collected during the summer contain more than 0.1 g/t Au, among which seven (7) contain between 1.28 g/t and 26.30 g/t Au. 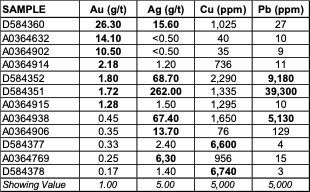 Granite and associated pegmatite of the Vieux Comptoir Granitic Suite are common rocks in the eastern part of the Serpent Property, near Lake Sakami. These rocks are hosted in amphibolitized mafic volcanics, paragneiss and gabbro near the major boundary between the La Grande and Opinaca subprovinces. Harfang conducted a preliminary reconnaissance of the lithium and rare element potential of these pegmatites and granites collecting 18 grab samples (Figure 3). Table 2 lists samples collected in pegmatite with values above 360 ppm beryllium (Be), which is the lower limit for a beryllium showing, and associated rare elements. Multiple samples give highly anomalous cesium (up to 998 ppm Cs), lithium (up to 1,420 ppm Li), niobium (up to 278 ppm Nb), rubidium (up to 1,095 ppm Rb) and tantalum (up to 173 ppm Ta). Bold values in the table are considered to be highly anomalous results. Such enrichment for these elements is typical of pegmatite swarms favourable for hosting significant amounts of lithium and rare elements.

Some samples were taken in complex pegmatite dykes and stocks containing minerals such as muscovite, black tourmaline, garnet, and beryl. Figure 3 shows centimetric beryl crystals in pegmatite at site SER-22-RO-029 (sample B346920). This sample was intentionally selected for beryl crystals to better characterize the signature of the associated elements such as cesium (998 ppm) and lithium (1,420 ppm).

Table 2. Lithium and rare element content in the most significant samples collected in pegmatites in the eastern part of the Property.

The Company is in the process of integrating technical data from the current program as well as completing a merge of datasets from both the Serpent and Radisson properties in order to conduct an overall assessment of the data, which is anticipated to lead to drilling in 2023.

The Company is also pleased to announce that, subject to regulatory approval, it has engaged the services of Independent Trading Group (“ITG”) to provide market-making services in accordance with TSX Venture Exchange (“TSX-V”) policies. ITG will trade shares of the Company on the TSX-V and all other trading venues with the objective of maintaining a reasonable market and improving the liquidity of the Company’s common shares.

Under the agreement, ITG will receive compensation of $5,000 per month, payable monthly in advance. The agreement is for an initial term of three months and will renew for additional one-month terms unless terminated. The agreement may be terminated by either party with 30 days’ notice. There are no performance factors contained in the agreement and ITG will not receive shares or options as compensation. ITG and the Company are unrelated and unaffiliated entities and at the time of the agreement, neither ITG nor its principals have an interest, directly or indirectly, in the securities of the Company.

ITG is Canada’s only brokerage firm dedicated specifically to professional trading. As Canada’s foremost market-making firm, ITG provides Market Making and Liquidity Provider services that are objective and focused. With its head office in Toronto, ITG employs professional traders and provides real liquidity, with an underlying emphasis on integrity and success.

The technical information in this news release was prepared and approved by François Huot, P.Geo, Vice President Exploration of Harfang, who is a non-independent qualified person for the technical disclosure as defined by the National Instrument 43-101 Standards of Disclosure for Mineral Projects (“NI 43-101”).

The soil and rock samples reported above were delivered to ALS laboratories in Val-d’Or, QC. Preparation for analysis and analytical determination were made in various ALS laboratories in Canada (Val-d’Or, Vancouver, Sudbury). Each soil sample was collected in the B-horizon layer using an auger and placed in a paper bag which was wrapped in a plastic bag to avoid contamination between samples. All soil samples were prepared using the PREP-41 method. Chemical elements of the fine fraction (<180 mm) of soils were determined by ICP-MS following an Aqua Regia partial digestion using a 25-gram aliquot (AuME-TL43). The lower detection limit for gold with this method is 1 ppb. Rock samples (except pegmatites tested for lithium and associated rare elements), prepared with the PREP-31A method, have been analyzed for gold and 33 other chemical elements. Gold was analyzed by atomic absorption following fire assaying on a 30-gram sample fraction (Au-AA23). Other elements were analyzed using the four-acid ICP–AES method (ME-ICP61). Rock samples with >10 g/t gold were reanalyzed with a gravimetric finish (Au-GRA21). Silver (>100 g/t Ag) and base metals such as Pb, Zn, Mo (>1%) were analyzed by ICP following a four-acid digestion. A few samples were analyzed for Pt and Pd by fire assay and ICP-AES finish (PGM-ICP23). Rock samples collected in pegmatite were prepared with the PREP-31A method and analyzed by ICP-MS following a sodium peroxide fusion (ME-MS89L). Standards (OREAS certified samples) and blanks were inserted by Harfang among the rock samples. The sampling procedures and the quality control followed protocols developed by Harfang and ALS. Preliminary data interpretation was done by Harfang.

Cautionary statement: Grab samples described above are selective by nature and reported grades might not be representative of more extensive mineralized zones.

Harfang Exploration Inc. is well financed with approximately $9.49 M in the treasury as of July 31, 2022 and is a technically driven mineral exploration company with the primary mission to discover ore deposits in Québec and Ontario. The Company is managed by an experienced team of industry professionals with a proven track record of success, controls a portfolio of highly prospective projects and has a strong financial position. Harfang is dedicated to best practices through engagement with all stakeholders and commitment to the environment.

On behalf of the Board of Directors and for further information, please contact:

November 16, 2022 – Montreal, Québec. Harfang Exploration Inc. (“Harfang” or the “Company”) (TSX-V: HAR) is pleased to provide an exploration update on the Pontax Property (the “Property”) under option to Li-FT Power Ltd. (“Li-FT”; CSE: LIFT) located in the Eeyou...

END_OF_DOCUMENT_TOKEN_TO_BE_REPLACED

August 31, 2022 – Montreal, Québec. Harfang Exploration Inc. (“Harfang” or the “Company”) (TSX-V: HAR) is pleased to announce preliminary results from a recently completed soil geochemical survey on the Egan Gold Property (“Egan” or the “Property”). Egan is...